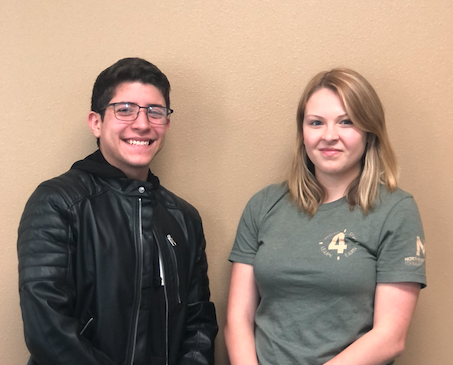 Maxime Risner and Brian Ramirez were among seven winners recognized across the entire state of Texas.  While NTCC’s chapter, Alpha Mu Chi, has had Walter B. Cooper Scholarship winners in the past, it is unprecedented for the chapter that two applicants be awarded within the same year.  Risner will receive $750 and tied for the overall first place application and Ramirez will receive $250.

Currently the President of the Student Government Association, Honors Scholar, and Vice President of Events for Phi Theta Kappa, Risner, of Winnsboro, is heavily involved on campus and within her community.  She works closely with the campus director of student development essentially representing and giving a voice to the entire student body.  Since the start of the semester, she has already helped to plan, host, prepare for and clean up for an advisor orientation, a silent disco party, and a cookie social.  Risner has also excelled academically within the Honors program.  Her research on the “Disenchantment of Rural Veterinarians” won a 3rd Place Caldwell Award, 2nd Place at the McGraw-Hill Poster Contest, and she will present at the end of this month in Orlando, Florida at the National Collegiate Honors Council Conference (NCHC).  Outside of campus, she volunteers for her church and assists the Sunday school program.  Risner is pursuing a degree in Veterinary Pathology and has experience in the field as a volunteer for her hometown veterinary clinic.

“I am very grateful to have the opportunity to be accepted for this scholarship.  It truly is an honor.  This is one of the largest scholarships I have applied to, so I was stunned at first but ultimately very ecstatic to find out that I won,” Risner said.

As President of the chapter, Ramirez is highly visible on campus and often recognized for his outstanding, innate leadership skills.  He was recently awarded the Dr. Charles Florio Leadership Award, and because of his combination of academic excellence, leadership, and public service, he received the $2,500 James and Elizabeth Whatley Honors Endowed Scholarship.  He won 1st place in the 2021 McGraw-Hill Poster Contest with his “Mozart Hypothesis” poster, which was his conceptualization of filming in honors and Phi Theta Kappa.  He will also be presenting at the NCHC and will discuss ways in which students of higher education can contribute directly to regional culture.  He also recently won $400 and placed 1st with his poem “Forgotten Home”, a memoir to an abandoned funeral home.  Ramirez aspires to become a math instructor and hopes to one day encourage his students to be well-rounded community leaders as well.

“The chapter has the largest officer team it has had in its history, due to the example set by Brian Ramirez. He generates excitement and encourages others to aim high, seeking new levels of achievement,” said Dr. Melissa Fulgham, Division Chair of Social Sciences and lead advisor for the Phi Theta Kappa chapter.

“I am so glad and so thankful for everyone that aided me in the building of my scholarship application.  I feel as if with every new accolade I win, my scholarly ambition grows exponentially.  It’s situations like these that remind me why I work as tough as I do and why I became an honors student in the first place.  I am forever grateful for every opportunity I get to grow as a student,” commented Ramirez.

Phi Theta Kappa, the world’s oldest, largest, and most prestigious honor society for two-year colleges, founded in 1918 and currently in the United States and ten other nations, offers access to $90 million in scholarships to eligible members.

Ramirez and Risner raised the total to nine NTCC students to have won the Texas regional Cooper scholarship in eight consecutive years.  Carolina Alcocer- Salas won in 2020, Tonya Hammonds won in 2019, Jazmin Garcia in 2018, Alicia Cantrell in 2017, Tanika Santos-MacSwain in 2016, Mary Smith in 2015, and Kayleah Cumpian in 2014. 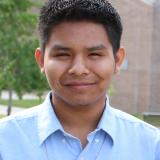