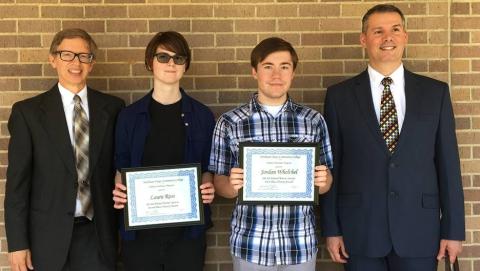 Two Northeast Texas Community College sophomores were the recipients of this year’s Bonnie Spencer awards.  Jordan Whelchel, a Presidential Scholar writing in the required non-honors class, won $100 and first place for his original work on “Capitalist Chemistry.”  Laura Ross’s second-place essay, winning $50, concerned the persecution of Russian immigrants during the era of World War I.

Whelchel’s “Capitalist Chemistry” maintained the idea that the discipline of chemistry has led to the discovery of new fertilizers, pesticides, plastics, and pharmaceuticals. The value of these discoveries imparted a commercial energy to the field. Ross’s work pointed out that Russian Americans received a unique “double whammy” in the years, 1918-1920.  First, the group included a large number of ethnic Germans who were America’s enemies in the first world war, and second, the group was accused of harboring many communist subversives during the Red Scare that followed.

A reviewer from NTCC’s history department noted that Whelchel’s work was a novel “apologia for chemistry.”  Another reviewer noted that Ross’s work elaborated the still-relevant connection between popular suspicions and persecution.

Colton Garrett won an Honorable Mention and third place with a 2,000-word essay that thoughtfully explored the fate of Poland in World War II.

The contest honors the first student founder of the college’s first history club in 2002. This year the contest had a record sixteen entries.  Title V Honors Coordinator, Andrea Reyes, adjudicated the contest.

History at NTCC offers courses in American, Texas, and World Civilization.  The college’s Webb Society, linked both to Honors Northeast and to the study of Texas history, recently won a State of Texas Caldwell Award, and a Webb Chapter-Award for its film on Barbara Conrad. Since 2008, students at NTCC have presented works of history nationally, regionally, and locally.  Each year since 2015, NTCC students have published essays in the state’s collegiate journal for Texas History, Touchstone.