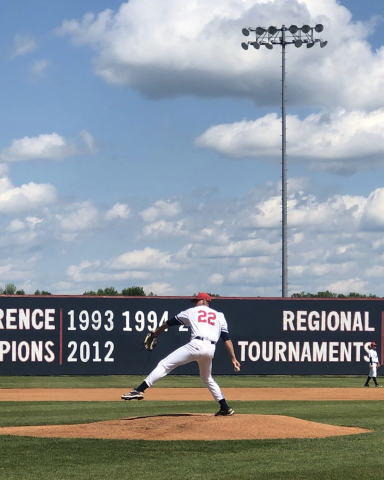 Northeast Texas Community College Baseball and the Panola Ponies finally met up on Sunday for game one of the three game series after a few days of rainouts. NTCC took down the Ponies 15-7 in a run ruled shortened game.

Mikel Howell (Huntsville HS) started on the mound and looked sharp for the Eagles. Howell pitched five and two-thirds innings before giving way to Chase Richter (Cypress Woods HS) to finish things out for the Eagles. While the Ponies scored seven runs off Howell, just two of the runs were earned, on seven hits, four walks and six strike outs. Richter would pick up two additional strikeouts in his one and one-third inning of work.

Both teams played quick the first two innings of play with the first runs for either team coming in the third. Panola managed five runs to take an early 5-0 lead.

NTCC answered back quickly with four runs in the fourth. Cole Modgling (Medina Valley HS) started things off with a triple that was bobbled by the centerfielder which allowed the speedy Modgling to turn it into an inside the park homerun. Sawyre Thornhill (Huntington HS) reached via a walk and scored when the next batter up, Nico Baumbach (Euless Trinity HS) hit a homerun to left-center field to bring the game to 5-3 Panola. The Eagles were not done and Cameron Loy (Mansfield HS) reached base when he was hit by the pitch and advanced to third on a single by Jake Chapman (Boerne HS). Bryce Yosko (Spring HS) hit a deep sacrifice fly to center to score Loy to cut the lead to 5-4.

The Eagles took the lead in the fourth inning when they plated three more runs to lead 7-5. Modgling again led off the inning, this time with a walk. Luke McBride (Nashville, AR HS) singled to right to move Modgling to third base. Thornhill would hit a sac fly to center to score Modgling for the first of three runs scored in the inning. Loy continued his good day at the plate with a double off the wall in right-center field to score McBride. Chapman would follow that with a double off the left-center field wall to bring home Loy and make the Eagle lead 7-5.

Khalon Clayton would single in the bottom of the fifth and later score on a sac fly by McBride to move NTCC ahead 8-5. Panola tried to mount a comeback in the sixth, scoring two runs before Richter shut them down to get the Eagles out of the jam with an 8-7 lead.

A big seven run sixth inning for the Eagles proved to be too much for Panola to overcome. Back to back walks by Baumbach and Loy followed by an error when Chapman came to the plate started off the big inning. Jett Forrest (Lorena HS) would draw a one out walk to load the bases for the Eagles. Clayton would single to left to bring in Loy. McBride would draw a two out walk and later score when Thornhill singled to right field to bring the score to 13-7 NTCC.

Baumbach continued his good day offensively when he drove the ball to right-center field to score McBride and Thornhill to put the Eagles ahead by 8 runs, 15-7.

Richter came out for his second inning of work and struck out the first batter. After walking the second batter, he induced ground outs to third base and then for the final out, a ground ball to short stop to end the game.

Games two and three for the series moves to Panola College on Monday, April 19. The conference has adjusted the remaining weekly schedule for the baseball teams, NTCC will take on Bossier Parrish CC on Friday, April 23rd in Bossier and then play a double header at NTCC on Sunday at 1:00pm. 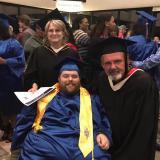