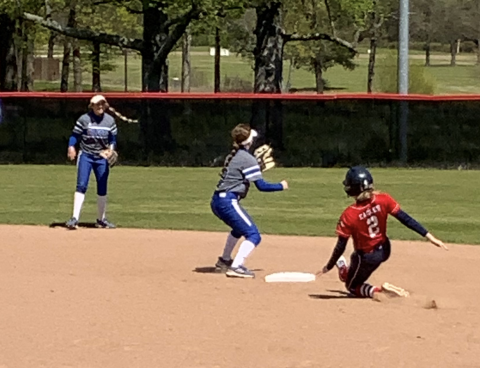 Northeast Texas Community College started the second round of conference on Saturday, April 3 with a two-game series with Paris Junior College. After PJC defeated the Eagles in game one 19-1, NTCC bounced back for a 15-7 win in game two.

PJC kept the Eagles off the base paths in game one, limiting NTCC to just two hits, two walks, and one run scored to get the victory in the opening game of the two-game series.

Game two started out in PJC’s favor, but NTCC was resilient and would not give up in game two. The first two inning were quiet for both teams offensively, and PJC got on the board first in the third inning to lead 1-0. Paris added six runs in the fourth to lead 7-0, but NTCC would shut them down at this point and not allow another run in the game.

Kailey Hancock (Central HS) would get NTCC on the board in the fourth inning and cut the lead to 7-2 when Hancock hit a two-run homerun to left field to score Haylee Wilson (Hughes Springs HS) who reached on a single early. Hancock’s home run helped NTCC break the single season team homerun record, beating the previous mark of 35 homeruns.

The fifth inning saw NTCC cut further into the PJC lead when the Eagles scored three more runs to bring the game to 7-5. Abby Russ (Hooks HS) reached base as the lead off hitter and scored when the next hitter, Hanna Allen (Hudson HS) homered to left field to bring home two runs. Wilson would also hit a solo homerun in the inning as well to bring the Eagles closer in the comeback attempt.

The Eagles ended the game early with a big ten run sixth inning which was capped off with a walk off triple by Russ. NTCC pounded out eleven hits off multiple PJC pitchers in the sixth inning. Russ came to bat with two outs and runners on first and second base. Emily Cole (Paul Pewitt HS) who had come in to pinch run for pitcher Avery Ayers (Mount Pleasant HS) was on second and catcher Lauren Isbell (Burleson HS) was on first base when Russ drove a pitch down the right field line to the corner for a walk-off triple to end the game.

Averie Ayers would pitch in game two and striking out five in picking up the win for NTCC. The Eagle hitters brought the team season homerun total to 38 in the game with three homeruns on the day to help the Eagles win game two.

NTCC will be back in action on Wednesday, April 7th when they travel to Athens to take on Trinity Valley Community College.